Background That Led to Following A Strava Training Plan

In June of 2020 I decided to take my health seriously, and drop some weight. While I was still biking a lot at the time I also began to more consistently run and kept my weeks in the 20-25 miles range. As the summer and quarantine progressed I increased mileage in anticipation for a low key 30km race and eventually strung together 4 weeks that built from 26-38 miles. The race went great, I won it thanks to there being less than 20 runners in the field, and it encouraged me to do more.

The next two weeks I moved up to 42 miles each week, and then decided to make a real push. I had never before run a true training plan, at least since high school, and was excited to be able to post some big mileage weeks and see if the reddit forums were right that upping mileage was key.

Even just maintaining 40-45 miles and adding workouts appeared to match a lot of training I was seeing on the forums and which was turning out better times than mine. As a Strava premium subscriber there was easy access to one of the personalized training plans from McMillan. This is what began my first 6-week training plan for a 5k.

Setup Of A Training Plan For Sub 20 Min 5k

The larger goal of this program is to rebuild a running base in order to build a new personal record across all distances 1k-50k. It was clear from a few recent harder efforts that I was close to my best fitness, below are the PRs at various distances to achieve that goal. These are all quick enough and done effectively as races at those distances, but in actuality are what Strava tracks me at so there’s a chance to beat them even just during training runs. The 1k is the only illegitimate one as it was run steep downhill, I’ve never raced a 1k. I choose the 5k as my first target in large part because it was so close to the magical 20 minute mark. As a high school runner I ran in the mid 19s a few times,  but that 20:05 PR was run in my early 30’s. As someone in their late 30s I knew that breaking 20 would put me in an age group podium at most smaller local races and if I was able to drop enough a lifetime PR was not out of the question. With those thoughts to motivate me, I began the 6 weeks eager to see what could be done.

Training Notes From A 6 Week Training Plan for a 5k 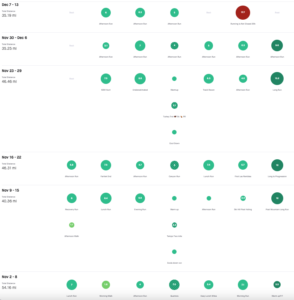 The training plan started on “rest” day but I ran to log base miles. In general it seems that running more equates to faster, so long as you stay healthy.

Tuesday speed work was faster pace than predictor, a 12-16x400m at 77-84 seconds, measured out on the dirt path with moderate 4-5 foot decline and 1-2 feet incline. My measured quarter mile may have been short but this was the first indication I may be in better shape than the predictor numbers. Still ran all of them in 1:17-1:24, even short this would be 1:23-1:30 range which is spot on. It good but monotonous during the workout and I was happy to have 7 miles total for the day. Heart rate got up to 185 on the final few, wasn’t all out efforts but could stand to make it feel easier. This was motivating in that I realized I could complete a solid workout and especially because it included a proper warmup and somehow even a workout resulted in 7 miles.

Did the long run on a Sunday, planned to go around 10-12 miles in limited time. After 3.5 uphill, my watch stopped and started a new segment, the next 1.5 miles were uphill to the turnaround at the toll road, all below 7:30 pace then started going 6:45 back downhill. Two more miles in I realized I was near or below 7 average for the after watch pause and still had downhill miles left.

Week 2 – Down week, base building.

Again made all of the rest days into easy running days. I may have been a little encouraged by my Apple Watch saying I had a streak of closed rings, plus there was no other way to post 40+ mile weeks. Most of the easy days are on trails, so a bit hillier and a lot slower, but feels like a good way to build strength without much tax on the body.

Added in strides on Tuesday, Thursday Tempo Run which was a warm up then 2 mile hard effort at 6:11 min/mile. The  tempo run was faster than it should have been, not quite an all out effort but still faster than the pace I could hold for 50-60 minutes (typically that’s what a tempo was). That said, doing hard efforts slightly ahead of my original pace chart, which called for 6:51-7:07 miles, is a motivator.

Finished the week with short but very hilly runs at altitude while on a few days vacation, then managed to get in a strong 10 miler on the day we drove home. Felt great to have kept at it even during a disruption in schedule. The 10 mile long was supposed to be a progression run and managed to raise the HR for the final 20 minutes but the pace doesn’t reflect it in part because it was on the trails.

Still managed to keep the streak alive and was feeling it at the end of the week. Tuesday included some fartlek fun, 30 seconds hard efforts at the end of a 7 mile run. Liked this as a way to make the easy miles feel a bit more fun and gives me a chance to KOM hunt if I plan it right. Thursday’s workout was half mile repeats, the plan called for 5-6 and measured them out on a loose fire road that’s mostly flat but did it in both directions and one direction (odd reps) were noticeably quicker. Went faster than the originally prescribed (3:04-3:12)

The rest of the week started having some soreness in the legs. Easy Saturday wound up as a 6 mile trail run with 1k of climbing. Also doing a lot of walks (averaging over 20k steps/day) so likely adding to the leg stress. Progression long run of 10 miles still managed a final few under 7 min pace.

Finally took a rest day on Monday, it made a huge difference. Only took in 5k steps, did some pushups, and got to bed early. Legs felt really fresh for Tuesday, it was a much needed full day off. Did an easy run with two short sprint efforts in it and picked up a coveted KOM.

The workout day came on thanksgiving day, called for a 3-5 mile tempo so I decided to do a small time trial on the 5k as a mental boost and knowing it’s possible to recover quickly. Ran it on gravel fire road and put up a new PR by 1 second, the last PRwas gravity aided so this felt like validation, and total at 19:32. Long run finally went for a full 13.2 and ran my second fastest half marathon ever at 1:36:55 even with 6 stream crossings. Confident I could go for the 3 minute improvement it would take to PR in the HM, but waiting a few more weeks to put in that effort as it’ll hurt more.

The week began with some soreness thanks to the solid long run. Took Monday entirely off and walked a total of <5k steps, the lowest in months. Tuesday still feeling meh all around, diet was off but sleep is good, and didn’t manage to do the Fartlek instead going for a completely low HR run (<125) for a short bit.

The week began with some soreness thanks to the solid long run. Took Monday entirely off and walked a total of <5k steps, the lowest in months. Tuesday still feeling meh all around, diet was off but sleep is good, and didn’t manage to do the Fartlek instead going for a completely low HR run (<125) for a short bit.

These are from MicMillan calculator, using a 20:30 active 5k pace to project.  While the pace is prescribed, I also included how this translated to the last workout that was done during the training plan to show how it actually translated.